Although contemporaries attested Romantic ­qualities to François Gérard’s Belisar, it didn’t appeal to the arch-Romantic Delacroix: “The fortune of a great warrior who becomes a beggar, blinded by the tyrant to whom he is sworn to service, with only the support of a feeble child, is a poetic and pleasing enough ­image. But it could only weaken by a fussy detail, such as that snake. I also dislike the guide who is carried by his charge.” ­Gérard had caused a veritable furor with Bélisaire portant son guide piqué par un serpent at the 1795 salon, because he revolutionized the iconography ­established by his teacher Jacques-Louis David: ­Gérard’s Belisar, active despite his blindness, doesn’t wail against the ­ingratitude of the mighty of this world, but carries the ailing boy to a better future. ­Gérard’s ­Belisar has been read as impressively emblematic of the émigrés who returned to their fatherland after the ­elimination of ­Robespierre’s terreur. But the hope doesn’t lie in the return ­itself: ­Belisar as the Helper Christopher turns his back on the tricolor sunset over France, with a conflagration of terror behind it, and thus on the ­revolutionary past. He becomes a new Laocoön, who tries to rescue his son for a not yet ­foreseeable ­future that lies in the time and space of the viewer.

The first version of Belisar, with life-size figures, from the 1795 salon, has been lost. Here we show the smaller-sized version from 1797, from the J. Paul Getty Museum, attributed to Jean François Léonor Mérimée, or even to Gérard himself. 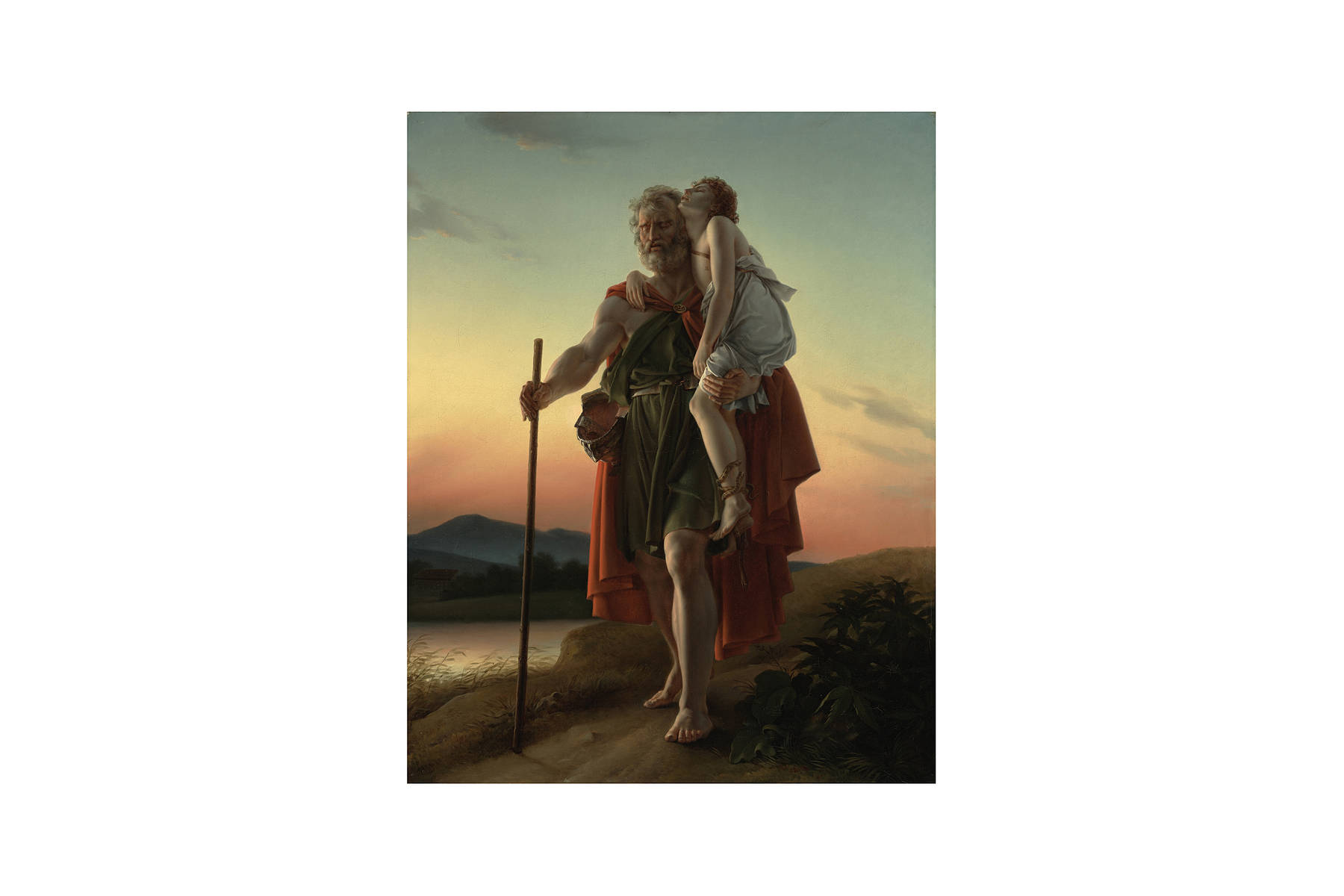 We are looking for relics of visions of the future in past image spaces, for the traces and signatures of something once imaginable and timelessly possible.

It may be due to the simple design of this dust jacket, which gives no indication of genre, and to the timeless bold-set capitals that name a familiarly unknown author below the tellingly seductive title, that you can’t hide the fact of your own ignorance and so decide to look into the legendary-seeming Boston Satyr Press. Research shows that Arthur West’s Drag-nets can hardly count as a successful title of 1916, and that Satyr Press is the rakishly avant-garde-sounding name of a publisher whose history will doubtlessly remain unwritten.
The item catalogued in the fall of 1986 in the Rosenbach of the Free Library of Philadelphia was probably purchased at the antiquarian bookseller Hamill & Barker, Chicago. Its acquisition date is unknown. The dust jacket is unfolded, that is, unused, and lacks a corresponding cloth- or leather-bound volume in the library inventory—and not only there. So perhaps the semi-finished adjunct to a book that was not reprinted or never bound? The latter is the case, for it is actually a deception specially produced for the US importation and concealment from customs of another work, subject to censorship between 1921 and 1934, of all the more assured prominence and quality: Ulysses, by James Joyce. And Arthur West’s Drag-nets? Specimen of a bygone power of literature and omen of the lack of printed books, whose futures will have to be recalled one day.

The Nonexistent Giotto
A picture may announce the future not in the sense that it refers to any future events but in the sense that it may get dated wrongly, or may seem later than it actually is. I suspect quite a few people would see in this picture an unknown Bacon, circa 1957. Some would admire that nonexistent Bacon in the Daumier; and compliment themselves for being in the unique position of being able to see the Bacon in the Daumier. Such is the position of seeing the future in a past occurrence.
Just as one sees the Bacon in the Daumier so one would mostly now see Don Quixote reading Don Quixote in Daumier’s “Don Quixote Reading.” The idea of Don Quixote reading something else would nowadays feel almost like a mistake. Bacon’s paintings are contemporary essentially in the sense that they always look like Don Quixote reading Don Quixote. The attribution of preternatural foresight to our ancestors is really a form of self-flattery, since of course we are the ones doing the detecting.
I say: stop this parlour-game and look at the Daumier. Forget what the old gentleman was reading; he wasn’t reading anything; he never was an old gentleman to start with. Most important, do look away from the book.  Pay attention to the blue window on the upper left corner instead. Without great effort you may get to see the nonexistent Giotto.