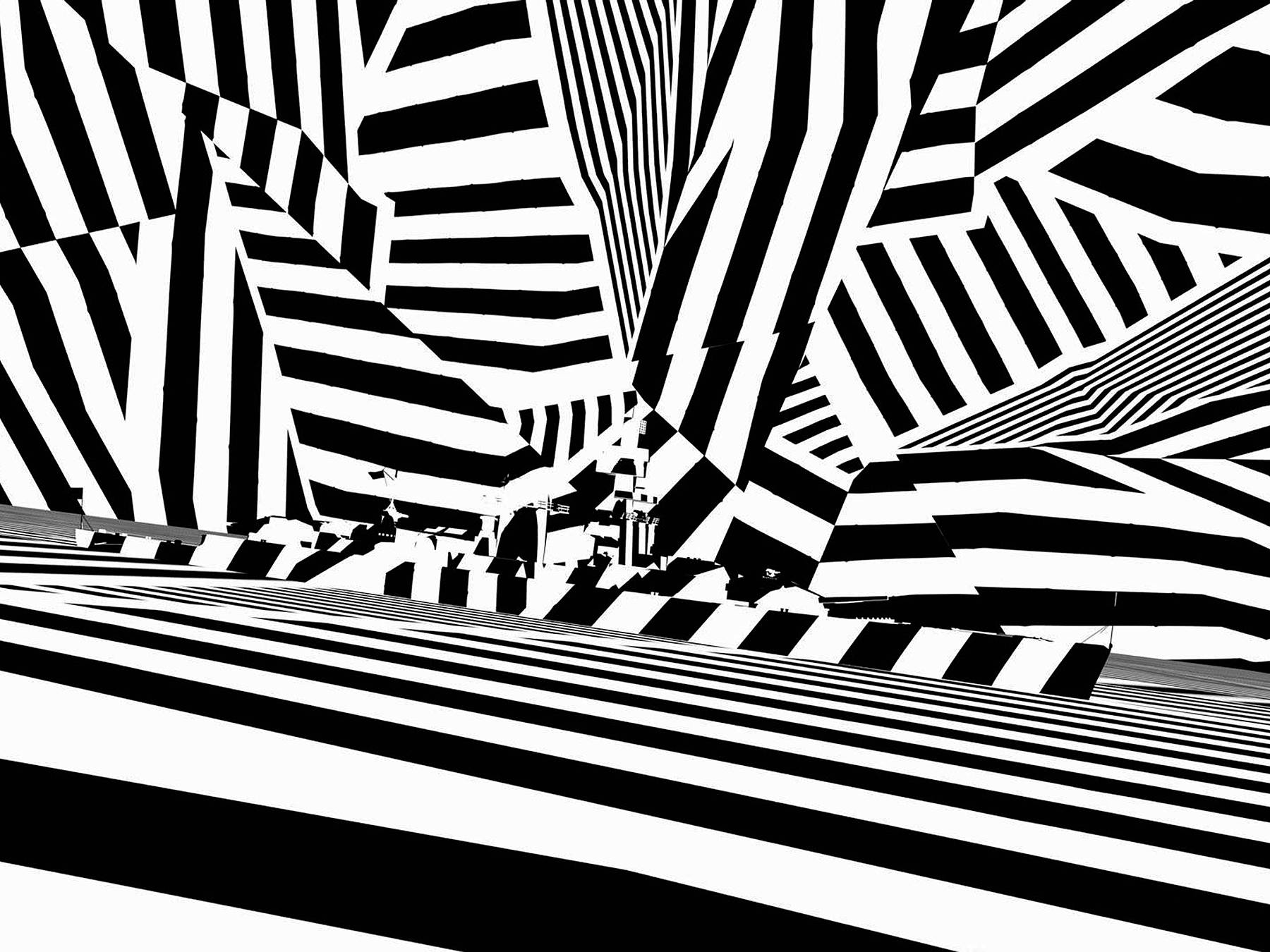 I went straight home from the airport, but there was only garbage and bills in the letterbox. Didn’t you get my last letter? Your silence is unsettles me more than I care for. Did my letter bore you? Was I too presumptuous? Everything just speculation? Please tell me! Write soon!

Four in the morning, somewhere top right of Wichita, no way I can sleep. The car park in front of the motel holds a dark-blue blackness. On the veranda the ice machine starts up the compressor now and then, only to conk out again, while over by the silos a cold wind absorbs the wailing horns of passing freight trains. They have names like Prime Horn, Nathan K5LA, or Leslie RS5T, and are offered as kits on the Internet, with air pumps and everything else you need—pure nostalgia. If I were an artist, I would think up an installation with Airchimes, and a lot of blue, the color of the horizon, the color of loneliness, of longing, of desire, or in the words of Rebecca Solnit: “the color of there seen from here, the color of where you are not.” Blues. In the bathroom of my parents’ house there was a window that opened onto a blue mountain range on the horizon. As a child I often sat on the toilet bowl and screwed up one eye, so as to align the ridge and a conspicuous flyspeck on the dirty window pane and with the other. If I tilted my head to the left and right, up or down, the flyspeck followed the line of the horizon. A small change of position, of perspective—even if due to boredom—causes desire and longing to become intrinsic rather than fulfilled. This crossed my mind yesterday, when I made the acquaintance of a old rancher who reminded me of someone, but I couldn’t think who. He told me how as a young man he had given himself the task—which, as he credibly assured me, he mastered with bravura—of laying barbed-wire fences in perfectly straight lines through the Great Plains. To this end, said the man, he used a home-made device, his own invention, which, in response to my disbelieving astonishment, he laboriously explained with the aid of sketches: a moveable metal bar, not dissimilar to a pantograph, is strapped to a vertical pole, which usually marks the beginning of the fence; screwed onto its end is a telescope, which thanks to the parallel kinematical structure of the bar can be shifted left or right of the pole at will, without losing its precise alignment. Looking through the telescope, the man explained, he was now capable of monitoring the line of posts disappearing into the prairie, while being able to give his workers continual instructions via a telephone that used the barbed wire as a leased line, until they eventually reached the horizon. Only then, said the man, was his device set up again on the new horizon. I didn’t believe a word he said. After we said goodbye it finally occurred to me who the man reminded me of: the scarecrow from the Wizard of Oz.

P.S. Have I already written to you that sad people can’t distinguish between blue tones as well as happy folk?

Shortly after your hasty departure from Warsaw I took a moment to look at the DVD you left behind—I assume on purpose. But why Ridley Scott’s Exodus: Gods and Kings, from 2014? You will have had your reasons, and you’ll have to take responsibility for them. Because when the first plague broke out over Memphis in full digital force after a mainly indifferent first hour, there was a knock at the door. It was the young German photographer from the opening the day before—I had suppressed the encounter and forgotten the appointment—accompanied by his Polish girlfriend and his portfolio. He wore a béret and a beard and seemed ambitious in a self-satisfied sort of way. He was working, he said, on a big thing; it would be “wielki,” he added coyly in Polish. He wants to portray the most important Polish artists—musicians, painters, authors, photographers, and of course filmmakers—and then “immortalize” them, as he put it, in gum bichromate prints. Without boring you with technical details, you need to know that gum bichromate was the preferred method of the pictorialists at the end of the 19th and beginning of the 20th centuries, a process that contrary to the classical silver photograph is exceptionally stable, but also exceptionally pretentious. With the gum bichromate the photographer turns himself into the painter of eternity. My objection was that impermanence appertains to the genesis of photography, that the light that draws the image and makes it visible should sooner or later be permitted to erase it, indeed must. Although the quiet rotting of the photographic paper, of the plates and films in the archives, is only a gentle echo of the decaying of their Barthesian referents; and had he seen Nicéphore Nièpce’s Point de vue du Gras in the original? which (unlike the familiar reproduction authorized by Gernsheim) barely shows a trace of the light that fell on a tin plate covered with bitumen of Judea—a light-sensitive bitumen, by the way, that has been extracted from the Dead Sea from time immemorial. I asked him if he knew that the Persian word for bitumen was “mumia” and gave the name for what we understand as mummification in ancient Egypt: artificial or natural circumstances prevent the process of decay at the cost of permanent physical presence, which only manifests permanent mental absence. In short, I said, gum bichromate prints are the mummies of photography! In retrospect that was the point at which his Polish girlfriend started making moves to leave. When the two rather indignantly departed, without our having looked at or discussed a single picture, I felt tired, depleted, and surrendered once again to the plagues over Memphis. I slept through the flight of the Israelites, and was only woken by the frenzied deluge of the showdown—not much of a sublime awakening. Do you know what I really miss in this film? The scene that every Bible film has to have, because of its unbelievable mythological power: Exodus, chapter 2, verses 1–10, the one with baby Moses cast upon the Nile in a “reed casket,” as Luther has it, daubed by his mother “with bitumen [really!] and pitch” to make it waterproof—or even lightproof? Was the casket a camera? Was Moses a film? A false conclusion, to be sure, but a fine one!