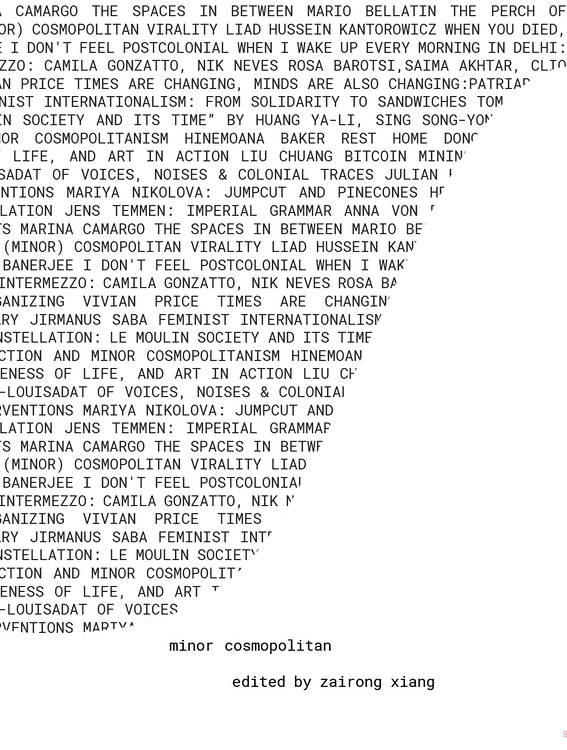 is a PhD fellow of the RTG minor cosmopolitanisms. She studied cultural history and theory, European ethnology, and German studies at Humboldt University of Berlin and Istanbul University. She has worked at the Berlin Sound Archive (Lautarchiv). Her research focuses on imperial knowledge production and its acoustic traces.

is a performance and visual artist who lives and works in Berlin. Her work is currently focusing on the dimensions of sound, language, and voice in the transmission of knowledge and memory, as well as on the relationship between voice and body within the context of social and political activism.

minor cosmopolitan
Thinking Art, Politics, and the Universe Together Otherwise

Cosmopolitanism is a theory about how to live together. The earliest formulation of cosmopolitanism in the West could be dated to as early as the fourth century BCE in ancient Greece by Diogenes, who famously said that he was a “citizen of the world – kosmopolitês,” an idea later picked up by Immanuel Kant, the German philosopher who proposed a philosophy of a world of “perpetual peace.” When cosmopolitanism first emerged as a political idea for modernity in the European Enlightenment, the project embraced the liberal promises of a globalizing economy, yet remained oblivious to, and even complicit with, capitalism, slavery and colonialism. It centered on the male, bourgeois, and white liberal subject, irrespective of the ongoing disenfranchisement, dehumanization, and extermination of its Others.

At the dawn of the 21st century, and in the wake of rapid globalization however, academics, politicians and other pundits enthusiastically declared cosmopolitanism to be no longer just a philosophical ideal, but a real, existing fact. Across the globe, they argued, people were increasingly thinking and feeling beyond the nation, considering themselves citizens of the world. Meanwhile, the global ecological crisis worsens, fascism with different outfits returns in many places of the world, the repression of women, sexual, racial, class and other minorities on a global scale persists; the so called “refugee crisis” inundates the mediascape and political spectacle. Not much of those cosmopolitan promises have left it seems. Perhaps precisely because of this, however, it seems to be an absolute necessity for scholars, activists, and artists today to face the complexities and promises cosmopolitanism has raised although not adequately answered. What has happened to the cosmopolitan promise, and who betrayed it?

“Minor cosmopolitanisms” wishes to challenge the underlying premises of ‘major’ cosmopolitanism without letting go of the unfulfilled emancipatory potential of the concept at large. It wants to rethink cosmopolitanisms in the plural, and trace multiple origins and trajectories of cosmopolitan thought from across the globe. Regarding cosmopolitanisms as emerging through diverse locally, historically and politically specific practices, minor cosmopolitanisms are predicated on difference without abandoning the quest for a shared vision of conviviality and justice. It seeks to answer: how to live at once with our difference and shared struggle? How to think our complicity with even those we most resist? Who sustains the world’s flourishing despite all this?